Debate Over Lower Tuition for Illegal Aliens in Virginia 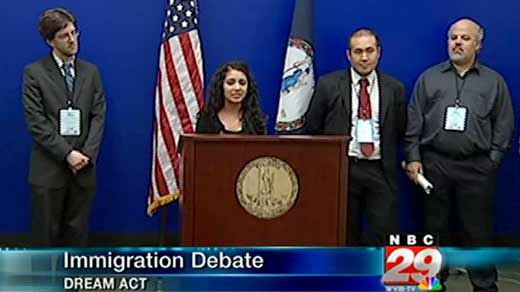 Wednesday, the debate over illegal immigration hits Virginia.  One group is pushing to grant in-state tuition for illegal aliens, with conditions.

Low-income women in their first five years of lawful residence in the United States are eligible for a number of pregnancy services under Virginia’s Medicaid system, including payment of labor and delivery costs and costs associated with the child once he or she is born. Prenatal costs, however, are not covered. Del. Lopez’s bill would change that...(More)

Newly elected Del. Alfonso H. Lopez, D-Arlington, is the sponsor of House Bill 779, legislation similar to the DREAM Act, which has languished in Congress for years.

Lopez's bill would provide in-state college tuition to undocumented students so long as they graduated from a Virginia high school and have lived in the state for at least three years. His or her parents would also have to be taxpayers.

"The fact is that the policies we have right now as they relate to in-state tuition are harmful to generations of young people who know no other nation but … the United States of America," Lopez said...(More)