The 2017 General Assembly Session is picking up speed. With just two weeks left to pass legislation from its house of origin before the impending crossover deadline, the legislative session has moved quickly into high gear.

Of the 15 bills and 5 resolutions that I sponsored this year, almost half of them have already been reviewed by the General Assembly. I've also greatly enjoyed meeting with numerous constituents and advocacy groups that have made the trip down to Richmond.

If you've never visited the Virginia General Assembly, please consider scheduling a visit during the legislative session. There is nothing that quite compares to seeing the longest serving legislative body in the New World in action.

On Thursday, the General Assembly reviewed my legislation to keep guns out of the hands of four-year-olds and close the “default proceed” background check loophole. These are both commonsense gun violence prevention measures. If an adult hands a gun to a child who is four years old or younger, they have lost control of that situation.

Additionally, we should not forgo a background check on someone just because the check will take longer than 24 hours. We should give the Virginia State Police or FBI at least five days to complete the check before the gun can be sold. 91% of background check can be completed within the current window, but it’s the other 9% that are more likely to turn up a red flag. For example, Dylan Roof had red flags that could have caused him to fail his background check if the FBI had more time to complete the check. Instead, he was able to proceed with his gun purchase and murder innocent people in South Carolina. Unfortunately, despite widespread public support, these bills - and dozens of other sensible gun violence prevention bills - were defeated (again this year) on party line votes in Committee.

This bill is a part of the House Democratic Caucus’s plan to help grow our economy and create jobs here in Virginia. It was passed unanimously out of subcommittee and received only one “no” vote during the full committee. I’m optimistic that it will be passed by the House of Delegates next week.

PROTECTING OUR ENVIRONMENT FROM TOXIC CHEMICALS

In addition, my legislation to create a hazardous waste site inventory and create regulations for chemical storage tanks in Virginia was heard in the Agriculture, Chesapeake, and Natural Resources committee.

Chemical storage regulations are also necessary to protect our drinking water. Right now, we have no regulations for these storage tanks, which could be leaking or poorly maintained. These are exactly the kind of storage tanks in West Virginia that failed and leaked chemicals into the Elk River, contaminating drinking water for thousands. We cannot keep turning a blind eye to these storage tanks in hopes that they won’t have any problems. Unfortunately, both bills were killed on party-line votes in Committee. 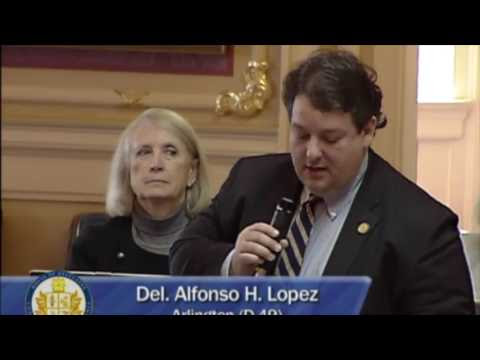 On Friday, I gave a speech on the floor of the House of Delegates thanking President Obama for everything he has done over the last eight years. You can watch the video online by clicking the photo or this link - https://youtu.be/DTOOlkceJnU

Whether it's his work saving our economy, promoting clean energy, protecting consumers, reforming health care, raising America's standing in the world, keeping us safe from those who would do us harm, or forwarding the causes of justice, fairness, and civil rights for everyone in our country, he has made undeniable progress moving our country forward. Now it is our job to make sure that we keep our country moving in the right direction.

Join me on Saturday, February 11th from 2:00 - 4:00 pm for a constituent town hall meeting with Senator Adam Ebbin at the Arlington Mill Community Center in room 527.

This is a great opportunity to let us know where you stand on the important issues facing the Commonwealth and learn more about the work Senator Ebbin and I are doing in Richmond.