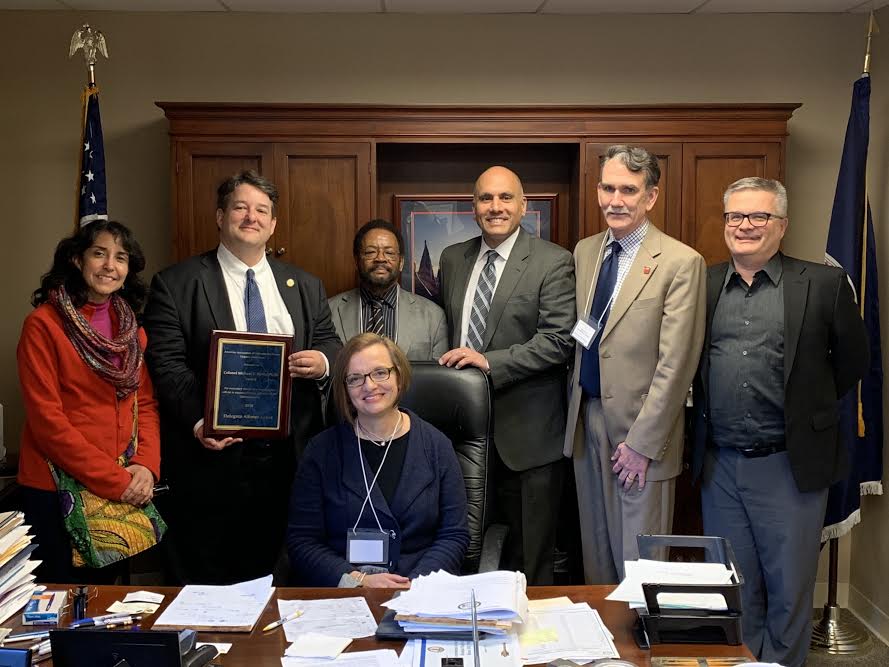 The Virginia Conference of the American Association of University Professors has presented the Colonel Michael S. Harris Award to Delegate Alfonso Lopez on Thursday, January 10, at the Virginia General Assembly. The award is given annually to recognize exemplary service in support of higher education by a Virginia public official. The award was presented during the 17th annual Virginia Higher Education Advocacy Day.

Delegate Lopez was first elected to the Virginia House of Delegates in 2011 to represent the 49th District. Delegate Lopez has consistently been the leader in legislative efforts to provide in-state tuition for immigrant children in what is now the Deferred Action for Childhood Arrivals (DACA) program, even before that program was created by the federal government. He has consistently supported diversity and inclusion in all levels of education and has proposed resolutions against hate speech, hate crimes, harassment, and discrimination in all forms. The AAUP considers these measures to be vital for inclusivity in academe and essential for the free exchange of ideas. Delegate Lopez has advocated for funding, access, and support of the Virginia Community College System (VCCS) and for equal access to high quality education at all levels. Delegate Lopez has fought for a strong and equitable system of public education, which is the vital foundation for an excellent system of higher education and for a strong civic culture.

The AAUP is a faculty membership organization that since 1915 has helped to shape American higher education by developing the standards and procedures that maintain quality in education and academic freedom in this country’s colleges and universities.

Colonel Michael S. Harris was Professor of French at VMI and a past president of the Virginia Conference of the AAUP. The award honors his memory.

Contact Brian Turner (bturner@rmc.edu) of the Virginia Conference of the AAUP for more information.