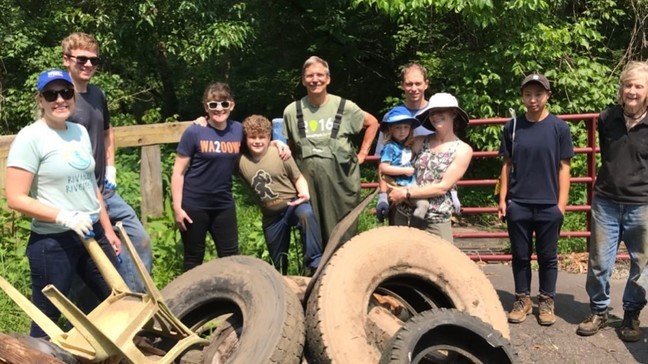 VIRGINIA BEACH, Va. (ABC7) — Thousands of volunteers across the Commonwealth of Virginia took part on Saturday in the 31st annual "Clean the Bay Day" — the Chesapeake Bay Foundation’s (CBF) shoreline and stream cleanup, deemed one of the largest volunteer events in Virginia.

CBF dedicated the event to those affected by yesterday’s shooting in Virginia Beach and held a moment of silence for the victims at many cleanup sites across Virginia this morning.

“This tragedy is heartbreaking,” said CBF Hampton Roads Director Christy Everett. “Virginia Beach is the birthplace of Clean the Bay Day. Through the years the city has been one of our most important partners in restoring our waterways. Our colleagues and friends in that building worked tirelessly for clean water. We dedicate this Clean the Bay Day to the victims of the Virginia Beach shooting.”

Approximately 3,500 volunteers gathered at nearly 200 sites across the state, both on foot and in boats, removing an estimated 45,000 pounds of litter and debris over an estimated 250 miles of shoreline.

“We had over 6,000 people pre-register for this event. That record-breaking number of RSVPs for Clean the Bay Day once again illustrates the groundswell of support in Virginia for clean waterways,” said CBF Hampton Roads Grassroots Manager Tanner Council. “This is how we meet our clean water goals – all of us working together for the common good.”

Participants also recovered many strange items from rivers and streams, including vintage milk bottles, a fruit basket, half of a laptop, a keyboard, a 57-pound tire, a car grill, a stadium seat, a cowbell, a gold watch and a small amount of cash.

Cleanups were held at scores of sites across Virginia, including Hampton Roads, Virginia’s Eastern Shore, Richmond, Charlottesville, Shenandoah Valley, and Northern Virginia. All of Virginia’s state parks within the Chesapeake Bay watershed had cleanup sites.

Since 1989, Clean the Bay Day has engaged over 161,700 volunteers, who have removed approximately 7.1 million pounds of debris from over 8,000 miles of shoreline in Virginia.